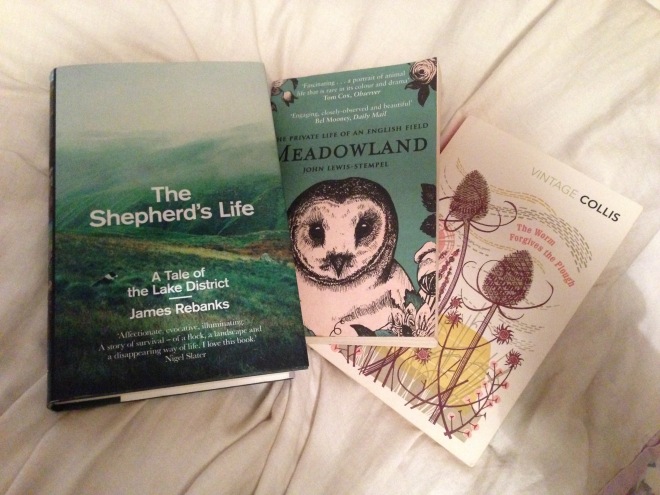 ‘Some people’s lives are entirely their own creations. James Rebanks’ isn’t. The first son of a shepherd, who was the first son of a shepherd himself, he and his family have lived and worked in and around the Lake District for generations. Their way of life is ordered by the seasons and the work they demand, and has been for hundreds of years. A Viking would understand the work they do: sending the sheep to the fells in the summer and making the hay; the autumn fairs where the flocks are replenished; the gruelling toil of winter when the sheep must be kept alive, and the light-headedness that comes with spring, as the lambs are born and the sheep get ready to return to the fells.’  – Goodreads

I am one of those people who struggles to re-read books (there are only a few that I have, there are so many new stories out there) but I remember as soon as I shut this book, I announced ‘I could DEFINITELY read that again’. It was a miracle book, it came just at the right time when I needed assurance that I was not crazy to love the outdoor life. This book has got a reputation as a bit of a fashionable accessory for the coffee table but I promise you, it is one of the best non-fictions I have ever read … possibly the best because I resonated so well with the narrative. It is beautiful, funny, honest. I went to the Lake District a month afterwards (yeah, like the tourists he intensely dislikes) and walked with the Herdwick sheep in Beatrix Potter land and drooled over the Belted Galloway cows. It is a gruelling yet magical spot to live and work in. So fresh yet raw compared to cosy south of England (horrendous drive, I can’t stand car journeys). It is a book for anyone who ever dreamed of the rough-and-tough of nature or of being a hardworking farmer/land person/outdoor worker in anything. You will sympathise with his fretting of daylight hours in winter.

‘What really goes on in the long grass?

Meadowland gives an unique and intimate account of an English meadow’s life from January to December, together with its biography. In exquisite prose, John Lewis-Stempel records the passage of the seasons from cowslips in spring to the hay-cutting of summer and grazing in autumn, and includes the biographies of the animals that inhabit the grass and the soil beneath: the badger clan, the fox family, the rabbit warren,the skylark brood and the curlew pair, among others. Their births, lives, and deaths are stories that thread through the book from first page to last.

In Meadowland Lewis-Stempel does for meadows what Roger Deakin did for woodland and rivers in his bestselling books Wildwood and Waterlog.’ – Goodreads

Very interesting book. Lewis-Stempel pretty much documents a year in a meadow belonging to his farm. He included fascinating facts about the wildlife you would not have imagined, history about the land and animals and – the best part, spoiler alert coming up – his tractor breaks down during cutting season and he scythes the meadow the old fashioned way, by hand, using a traditional scythe. Before I read Anna Karenina and the scene where Lenin scythes, this book alone encouraged me to pick up the old fashioned tools. I love all that stuff. I know it is all just fun and games and not serious farming like Lewis-Stempel or Rebanks, but I yearn for the old fashioned days before leaf blowers and electric saws were invented – how peaceful the countryside must have been and how much more exhausting yet fulfilling the work of a countryman must have been! It is the sort of exhaustion we don’t feel anymore, sitting in front of our screens the majority of the day (well, as a student I certainly do, and honestly cannot stand it), instead of picking up the scythe and cutting the grass. It is a very interesting, knowledgable read that I thoroughly recommend.

‘During the Second World War, John Stewart Collis left his comfortable life as an academic to work on the land for the war effort. His account of this time perfectly captures the city-dweller’s naivety and wonder both at the workings of nature and the toughness of life on a farm. Collis’s thoughtful curiosity leads him to explore a broad variety of subjects – from humorous sketches of the characters he works alongside to beautifully written pieces such as Contemplation Upon Ants, The Mystery of Clouds, Colloquy on the Rick and celebrations of the earthworm, the pea and potato.

This book I came across after Meadowland actually recommended it. It is written in the same style, documenting Collis’ experiences working on the land during the Second World War. Very interesting accounts again and not dull at all. Part Two is some more extra information about ants (so interesting) manure, potatoes, worms… just like Meadowland, before he gets onto talking about his work in a forest. This inspired me to ask for a bill-hook for my 21st along with the scythe… Another good read for anyone interested in accounts of working the land and the natural world that surrounds them.