I am going through a bit of an aubergine (eggplant) phase.

This curry is quick, simple and delicious with some rice and parsley and most of the ingredients can be sourced from your own veg patch. 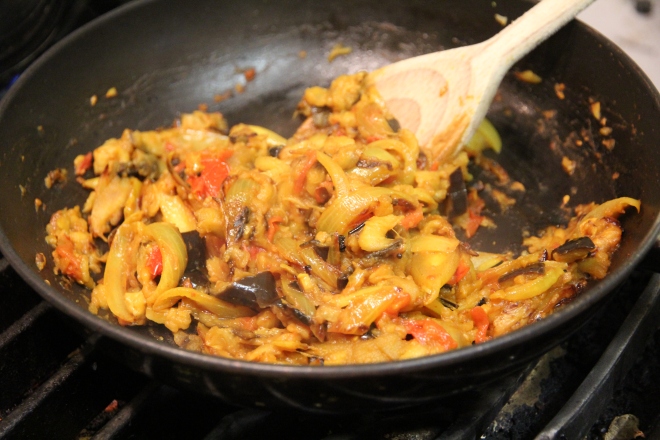 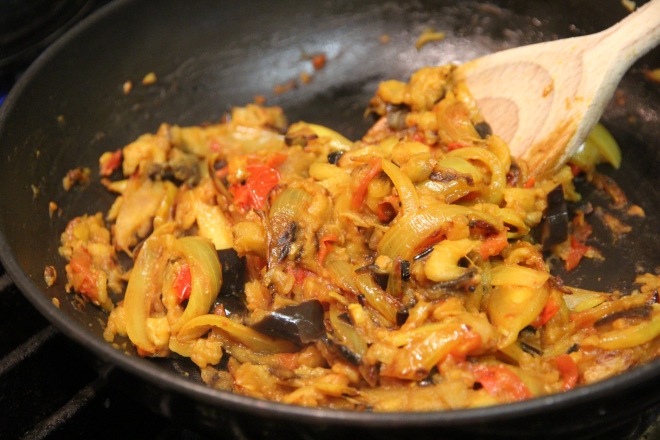 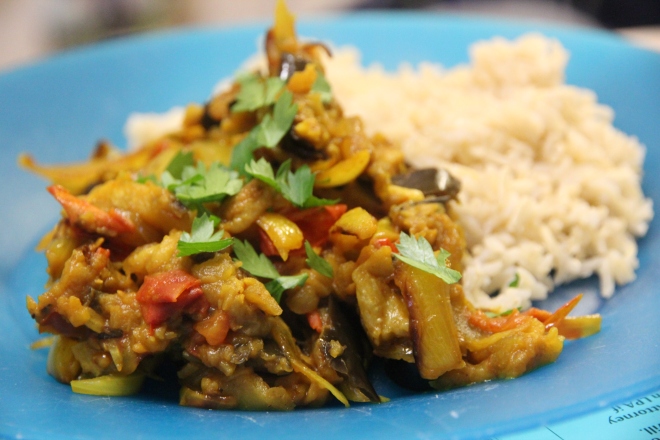 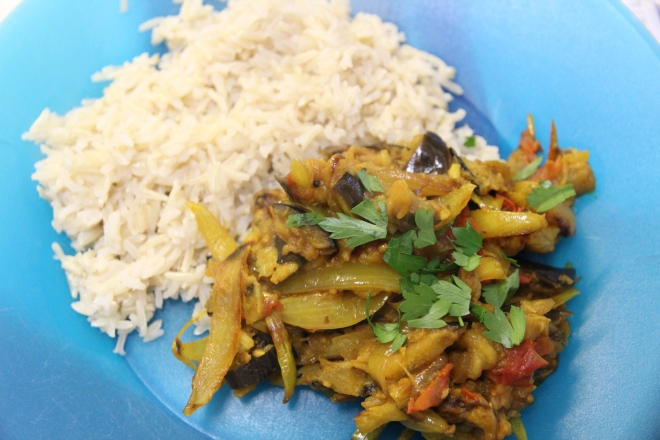 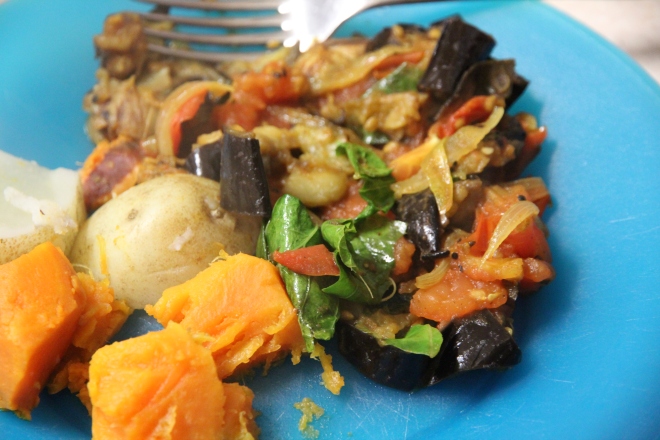 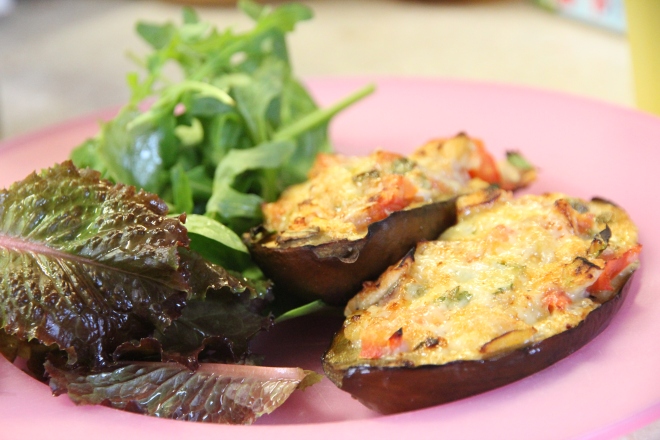 These are surprisingly easy, nutritious and delicious to make. 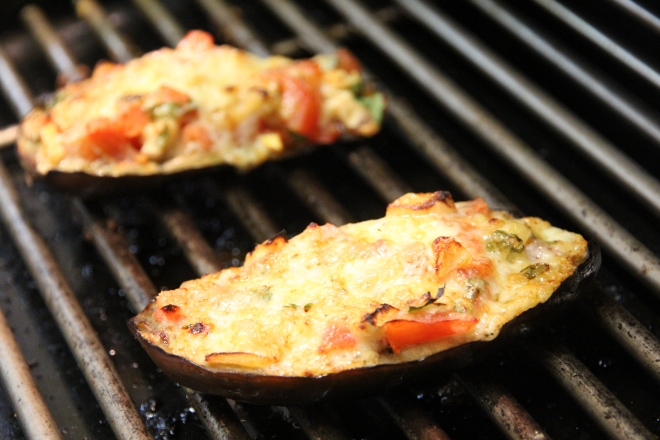 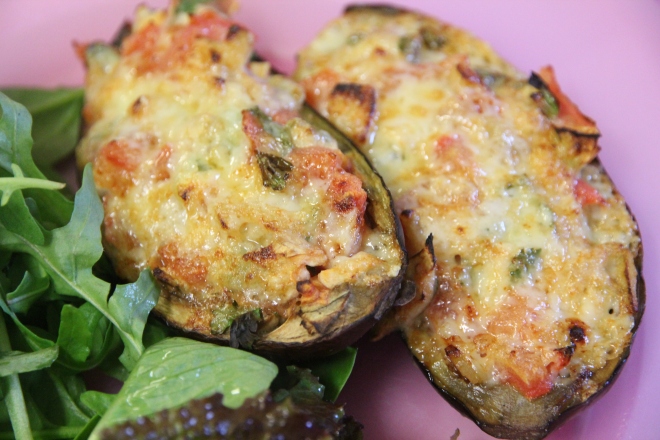 Like Loading...
The garden strawberry or Fragaria has been cultivated worldwide for its delicious red fruit. The first garden strawberries are believed to have been bred in Brittany in the 1750s through a cross of Fragaria virginiana from eastern North America and Fragaria chiloensis that was brought from Chile in 1714. This new production of strawberry as replaced the woodland strawberry, Fragaria vesca which was the first strawberry species cultivated in the 17th century.
The strawberry fruit was mentioned in ancient Roman literature, referring to its use in medicine. The entire strawberry plant was used for medicating depressive illnesses.
The French started taking the woodland strawberry into their gardens to harvest during the 14th century; King Charles V had 1,200 strawberry plants in his royal garden. During the early 15th century, French monks used strawberries to illuminate manuscripts.
During the 16th century the strawberry plant became more of an interest in the world of medicine and botany as more scientists began to name the various species of the plant. In England, the demand for strawberries had increased by mid-century. Thomas Wolsey invented the combination of strawberries and cream in the court of Henry VIII. By 1578 instructions for growing and harvesting strawberries were written.
In the 17th century, the species Fragaria virginiana was introduced to Europe from North America, an important part in the history of the strawberry as it produced the fruit we recognise on our supermarket shelves today. It gradually spread through Europe but it was not until it was introduced to the Chilean strawberry in France that it produced the modern strawberry. Strawberry cultivators vary. On average, a strawberry plant has about 200 seeds on its external membrane.
The time to plant strawberry plants is late summer and early autumn to allow the roots to establish into the soil that will still be warm.
Choose a spot in the full sun for the best harvest, a plot where you have not grown any of the Solanaceae family or chrysanthemums, susceptible to verticillium wilt of the leaves. Prepare the ground well with well-rotted manure dug in along with some Blood, Fish and Bone and dig in some mulch for good measure before sprinkling a generous amount over the surface to suppress the weeds. Dig a trench or holes and spread the roots of the plant widely, making sure that the crown is level with the surface. Allow 50cm between your plants, ideally but strawberries are not too fussy when it comes to space. Water and firm in. Keep the plant well watered over the next few weeks as they become established.
I have to admit, I have been amazed at the hardiness of wild strawberries. They spread like wild-fire in the garden. We have so many, I can afford to lose a few when weeding every now and then (they grow everywhere: vegetable beds, under trees, flower beds, in the middle of the paths, even in the grass). Over the last year when I was clearing and extending the vegetable plot, I dug up large collections of wild strawberries and shamefully and lazily abandoned them in piles. They all survived, even those dug up in boiling hot sun and left with their roots not planted in and no watering offered. If anyone ever wants something easy to look after (and spreadable), wild strawberries are the way to go.
To prevent the strawberries from spreading too much, snip off the runners. After the fruiting season is over, Mark Diacono, ‘River Cottage Handbook: Fruit’, recommends that you ‘snip off all old fruiting stems, runners and leaves, give your strawberry bed a good comfrey feed and add more well-rotted manure’ to encourage a healthy growth for the next season. Diacono also suggests that strawberry plants should be replaced after four years.
When the strawberries start to grow fruit, place straw underneath them to prevent them from rotting from contact with the ground.
Depending on the varieties of the strawberries you have, you can be harvesting the fruit from May until October. I certainly have earlier varieties in my garden. A tip I learnt from my online gardening course (MyGardenSchool : www.my-garden-school.com, ‘Advanced Vegetable Growing and Self-Sufficiency with Sally Nex) was to pot some strawberries inside the greenhouse over winter. Following this advice, I got a slightly earlier harvest of strawberries than the ones developing outdoors. It is a good trick if there is a late spring or summer.
Pick the berries when they are coloured or give slightly under the pressure of your fingertips if they are still a little white. Wash and eat straight away (I give the green tops of the strawberries to the poultry or pigs) or freeze. 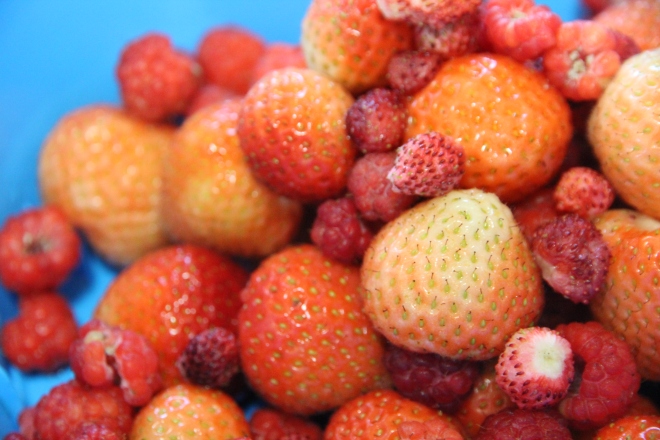 My biggest pest pain with strawberries are birds. They leave most other things alone, I still get a good crop of raspberries and blackcurrants but they seem to adore strawberries and redcurrants so these are the two things for me to net straight away. They will always manage to get through the netting (you need large enough holes for the pollinating bees to get through over strawberry beds) but netting does drastically reduce the amount of fruit stolen. I am all for sharing and being kind to nature, I love having my little robin friend in my garden and the blackbirds and thrushes but if they have the opportunity they will eat the whole harvest immediately – which is what happened last year. Determined not to be defeated again, I have been less fussy about how red they are, they taste just as delicious pink or with a little dash of white if they are not completely ruby-red, and we have been netting patches as much as possible. By the way, turning one of those hanging garden baskets people grow flowers in upside down is great protection for a single strawberry or small collection.
Other pests for strawberries are of course slugs and snails.
Strawberries are not too fussy about companion planting. Plants that are beneficial to strawberries themselves are: Borage (makes fruit taste nicer and attracts beneficial insects), Bush Beans (acts as a fertiliser, nitrogen-fixer. It also repels some beetles), Caraway (attracts parasitic wasps and flies that get rid of strawberry pests) and Lupin (fixes nitrogen in the soil like Bush Beans and attracts honey bees).
Plants that do not agree with being planted alongside strawberries are members of the cabbage family (cabbages, cauliflowers, broccoli, kale, Brussels sprouts, kohlrabi, etc.) as they stunt their growth and as I mentioned previously, the members of the Solanaceae family (potatoes, aubergine, tomatoes, peppers) as these are members of the same family as strawberries and diseases will be spread. Strawberries should be left to the same patch to establish themselves unless it is necessary to move them. Planting them in a bed alongside, say potatoes, will build up the risk of infecting your strawberry plants with a disease and that would be a shame. Strawberry plants are an investment for a number of years, after all.
To save space, as well as strawberry beds, we plant them around fruit trees and bushes where they can be left to stay along with bee friendly flowers to attract the pollinators to the strawberries and trees themselves.
Strawberries are an excellent source of vitamin C, a good source of manganese and other nutrients in less significant amounts. They contain modest amounts of unsaturated fatty acids in their seed oil. Research suggests that strawberry consumption may be linked with lowering the risk of cardiovascular diseases and that the phytochemical found in the fruit have anti-inflammatory or anticancer properties. Strawberries could possibly lower rates of hypertension and inflammation as well as cancer and cardiovascular diseases. Certain studies suggest that strawberries lower LDL cholesterol levels too.
As well as being eaten fresh, strawberries freeze well (I would recommend washing and storing them in a plastic bag or an old yoghurt or ice cream container after removing the stalks and any mouldy/bird pecked parts from the fruit to make it easier to use later). They make excellent preserves but are low in pectin to be wary when making jam to use some other source to make the solution set. Some people dry strawberries and include them in cereal bars. In the industry world, strawberries are used in milkshakes, ice creams, yoghurts, smoothies, as artificial colourings and flavours as well as many other things. The famous Wimbledon Tennis Tournament’s popular summer time pudding is strawberries and cream. In Sweden, strawberries are traditionally served as dessert of Midsummer Night’s Eve (so it is perfect to post the following recipe now). In Greece, strawberries are usually sprinkled with sugar and dipped in Metaxa, a brandy. In Italy, strawberries are used in a number of desserts and are popular in gelato alla fragora.
Childhood favourites of mine were mashed bananas and strawberries, the fruit dipped in cream and sugar, or a chocolate fondue, mixed into FAGE Total Greek yoghurt or cut up on top of Green and Black’s chocolate ice cream. Strawberries go marvellously with any chocolate dessert like volcano cakes or in particular alongside a Victoria Sponge cake.
The recipe I offer you is a Swedish one I came across that revels in both garden and wild strawberries as well as elderflower. The cake itself is easy to make and assemble as long as you provide time for allowing it to cool before preparing it. I decided it tasted at its best the day after it was made after being kept in the fridge overnight – the whole assemble tasted so much cooler and fresher, but it can of course be eaten straight away! It is a lovely summer time pudding that will look lovely and impress your family and friends.
Strawberry and Elderflower Cake
(Serves 10)
For the cake: – 4 large eggs – 200g caster sugar – 50g plain flour – 80g self-raising flour – 2tbsp baking powder
For the filling: – 4tbsp elderflower cordial – 1 heaped tbsp icing sugar – 150ml double cream – Strawberries, in quarters, about 250g is ideal but it can be more or less
For the topping: – 100ml double cream – 4tbsp elderflower cordial – Wild strawberries, to decorate 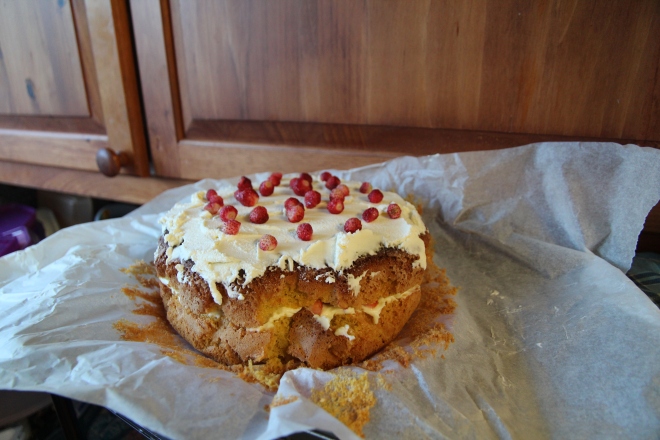 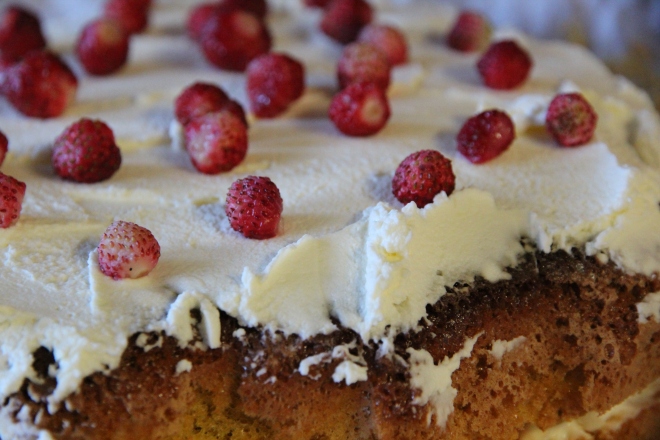 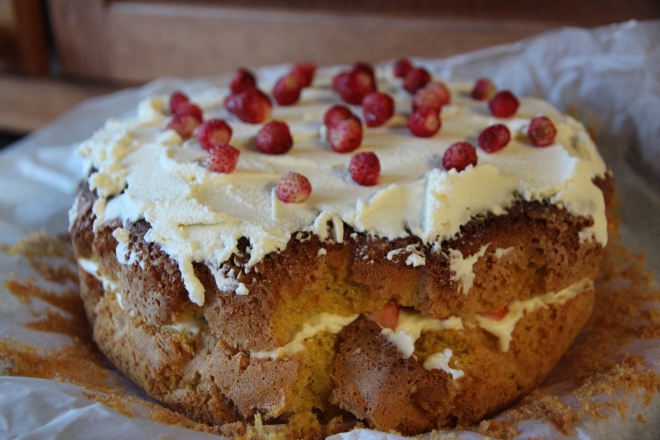 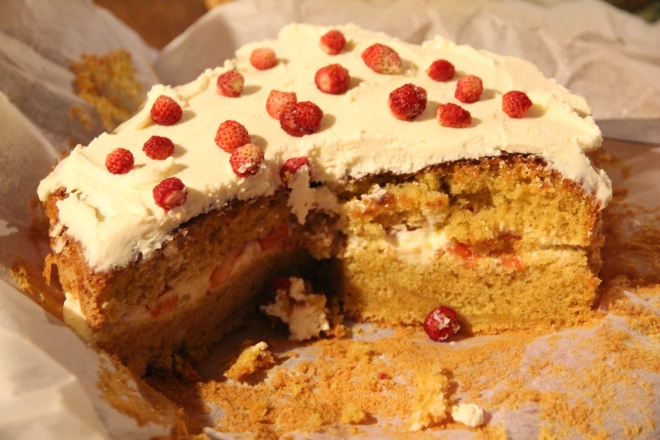